Posted on September 6, 2014 by Janelle | Leave a comment
Spread the love

Homestead in the Holler is a participant in the Amazon Services LLC Associates Program, an affiliate advertising program designed to provide a means for sites to earn advertising fees by advertising and linking to amazon.com.

When we came out to look at the farm back in April, I mentioned to our realtor that our daughter was really wanting a cat.  He happened to have some kittens and offered to give them to us when we moved to Missouri.  Our daughter has been VERY patiently waiting for her kitties.  Unfortunately, by the time the girls and I got out here, there was only 1 kitty left.

When the day finally came to go pick up the now half grown cat, my little cat lover could hardly contain herself!  Travis took her to the realtor’s office, the prearranged meeting place to pick up the cat.  The poor cat was not used to being in town or in a cage and was beyond scared.  They arrived home with the frightened cat, only to have her escape and run up a tree.  Daddy to the rescue!  Travis managed to get the cat out of the tree and back into the little dog cage.  Phew!  That was a close one!  They took the little cat down to the barn, gave her some food and hoped she would calm down.

Big brother decided to come have a look at this cat.  He apparently wanted the cat to know that he was the alpha male or something, so proceeded to growl and stomp and do all sorts of things boys do when they want to bother their younger sisters and scared cats.  In the process of all of that, the little dog cage somehow broke, and the beloved cat ran off for the second time.  I knew that she hadn’t gone far, but my daughter was heart broken.  She checked the barn nearly every hour to see if her kitty had returned.

Two days later, as Travis was getting water for the goats, he saw our little run away.  She was hiding on top of an old cattle chute that was completely covered in grape vines, and she was terrified.  We nearly caught her, but with a baby on my back, I couldn’t get into the vines and thorny honey locusts like I normally would,and after trying to catch her for quite a while we decided to try again later.  The next morning, as I was going into the barn to milk the goats, who should I just happen to sneak up on?  The runaway cat!  She apparently went back into the barn since we had left some food out, and had fallen asleep in a nesting box.  The cat tried to run away, but I was quicker.  I grabbed her and we put her in a rabbit cage, for lack of a better place to keep her.

We kept her in the rabbit cage for a couple of days, but it was more for my daughter’s peace of mind.  It turned out that our new cat, Sprinkles, was really quite tame. Sprinkles is now a very sweet, very loved, spoiled cat. 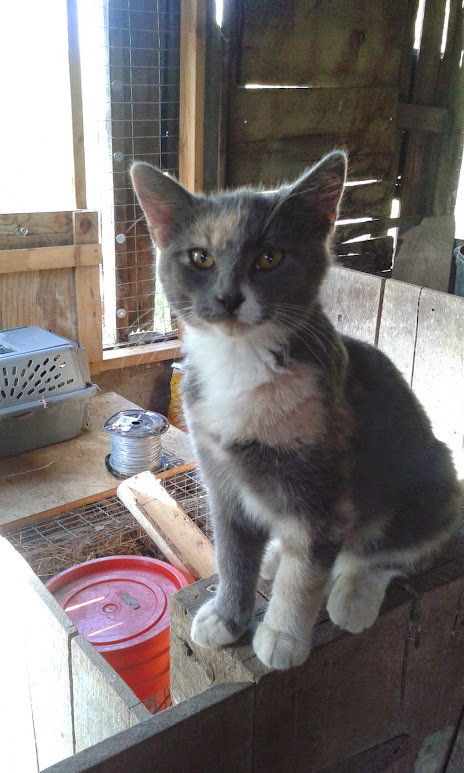 The lady at the post office (post woman?) is actively looking for a small kitten for us.  Our daughter is thrilled with the idea of more kittens/cats to love.  Our son is now campaigning for a dog.  I guess that’s next on the list!  But hopefully no more runaways.

Hi!  Around here I wear many hats. Homesteader, farmer, homemaker, homeschool mom, gardener and builder.  We strive for a simple, self-sufficient life on our little piece of paradise.  Read more

This entry was posted in Animals. Bookmark the permalink.